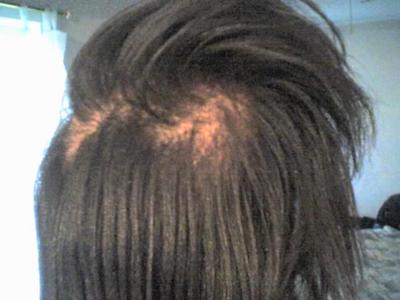 I have thinning and some baldness in the crown of my head. I used to get cornrow extensions quite a bit because of previous problems with hair growth.
Before the braids, I used to go the the salon and get perms and and a short hairstyle. At that time, my thinning wasn't as bad, but enough that my beautician had to create a style to cover it. When you begin to use hair color spray to fill in these spots, then you know you've got a scalp issue. Her styles gave me confidence, but I was still acutely aware of my scalp issues.

When I couldn't afford to continue going to the salon, I permed my hair myself. I tried to wait a long time in between to prevent overprocessing, but it was hard to wait as I am very tenderheaded. My hair was extremely kinky and thick. Notice I said "was." This worked for a while, but then my hair began to break off and my scalp would be sore for no reason. One day, I noticed that there was some slight bleeding at the crown, like something had scratched me pretty good. That's when I felt it was time to see a doctor. I stopped going to the salon at that point.

I went to a dermatologist who told me to stop using relaxers on my hair because this was the cause of my thinning and scalp issues. He also said that in alopecia was my problem and that he saw this a lot with African Americans who wore braids too tight. I asked if I could at least press my hair and he told me that was out of the question too. That's when I went to cornrow braid extensions. I thought that getting my hair braided and leaving relaxers alone for a while would help my hair start the growth process back. My hair grew some, but not at the significant rate I was hoping for. Those spots were still thin even with the braids.

To date, my hair is very thin in the crown and the spot to the left is almost slick. I get relaxers, but no that often because of this issue. In between, I press my hair in hopes of abating any further scalp damage from relaxers. I wear the longer part of my hair to the back and pinned up over those spots so it's not noticeable. I don't know what else to do but would really like my hair to grow back healthy and my scalp issue resolved. I don't want to wear extended hair to cover it the rest of my life, but what are my options here? I am considering braids again and my husband thinks this might be good for me, but don't know if this is a good idea again. Any advice?

By the way, here are some pictures of the crown of my head. I am embarrassed by these but need to do something about it as soon as possible. These were taken by a cell phone. The light spots are just a relection of the light I am standing in front of. If you need better pictures, please let me know. Thanks.